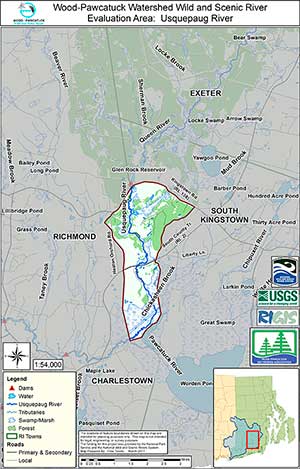 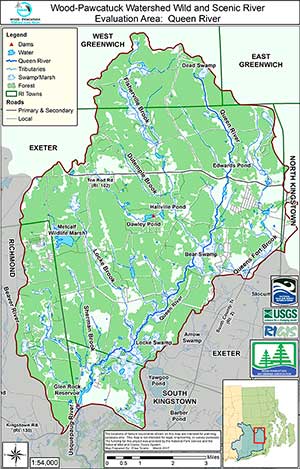 The river is divided into two sections by the Glen Rock Dam at the Usquepaugh Village.  Above this dam is considered the Queen River.  The Nature Conservancy and Audubon Society of RI own several key properties along the river.

Ecology – The many first and second order streams provide clean, cold water throughout the year, making this great habitat for freshwater mussels, brook trout, and amphibians.  There is a large pitch pine forest on TNC property with several rare species endemic to that habitat.  The lower section of the river is called the Usquepaugh River.  The last two miles of the Usquepaugh are part of the western border of the Great Swamp.  Both sections are 90% undeveloped.

Of the three largest river systems in Rhode Island, only the Pawcatuck River Basin contains populations of all local mussel species. The most significant concentrations of mussels in this system are presently found in the Queen River, with seven out of the eight documented species. According to the RI Odonata Atlas (soon to be published) this river has nearly the highest number of species of any river in the region, including more riverine species than even the Wood River.

Geology/Hydrology – An unusual topographic feature is the headwaters of the Queen River, the Dead Swamp in West Greenwich.  This unique wetland actually contributes water into two separate watersheds – the Wood-Pawcatuck Watershed and the Pawtuxet River Watershed.

Cultural – Near the village of Usquepaugh the Queen River is part of a large outwash plain, which contains significant agricultural fields.  The Queen River is used for irrigation of these fields.  The Kenyon Grist Mill, one of the oldest operating gristmills in the region, still grinds corn along the banks of the Queen River using the original granite grinding stones quarried in Westerly, RI.

More information regarding history of the watershed: